Love it or hate it, it’s that time of year again.

For the next four Fridays (counting this one), my Flashback Fridays will be Christmas themed.  This year, with all the crap in the headlines, I’d thought I’d go for some humorous tunes.  Enjoy! 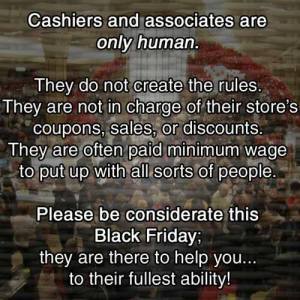 The happiest of Thanksgivings to all of you in the audience of this blog.

I hope you all remember that as Christmas comes, there is no bargain out there worth bodily harm or DYING FOR.

If there is, would you let me in on it? I could probably afford it!

Back in August, I wrote a blog entry about the events in Ferguson, Missouri at that time.

Last night, the officer who shot Michael Brown (albeit many times) was found to have “no true bill” by the local grand jury. In other words, he will not stand trial on the local judicial level. Make no mistake that Darren Wilson’s life will never be the same again even though he has been found innocent, and hopefully when all is said and done he can get on with his life.

As many predicted, things did indeed get ugly last night in the aftermath. Stores and businesses looted, some even burned down to the ground. Reporters feverishly reporting sounds of gunfire and the inhalation of tear gas throughout the night on the cable news outlets. Appeals for calm ignored, even those made by our President.

What I fail to understand, although recent American history of the past 50 years provides numerous examples of this, is why does a certain element of society wants to destroy the very infrastructure they themselves are apart of?

Change in a civilized society takes time. It also means taking the time to go to the ballot box when there are elections. Despite what con men like Al Sharpton say (look up Tawana Brawley if you’re younger than I am), there are no shortcuts on the road to reform. Go vote, go educate yourselves, learn the rules of the political process. If you have the means, run for office and make change happen yourselves. Rioting solves nothing!

In case you missed it last night (and I nearly did…sometimes 3 NFL games in a row is like a Thanksgiving turkey, it makes you sleepy), Odell Beckham Jr. made a catch for the New York Giants against Dallas’s Cowboys that will be the stuff legends are made of.

The Cowboys won the game 31-28, but this catch will live forever.

With Thanksgiving coming up (and gone by the time next Friday rolls around), I thought I’d “spin” this holiday classic.

Christmas songs will be coming up the next four weeks, with normal Flashback Fridays returning on December 26th. Enjoy!

For many years, the corruption that festered in the sport of professional boxing wasn’t exactly an open secret. I’m starting to think College Football isn’t much better, but it’s cozy relationship with a ton of sports networks keeps this from being discussed in boxing’s sphere.

In what universe does it make sense for two teams with one loss to be ranked higher than an undefeated team like Florida State? I get that FSU is the new “evil empire” of college football, but how do you rank an undefeated team THIRD? FSU should be number one until they lose, period. I don’t think they’d match up well with, say Alabama, for one team. But until that game is played, putting them ahead of FSU is a joke.

Was just watching the video out of Jerusalem on CNN this afternoon. There was so much blood on the floor of the synagogue where four rabbis (3 American born, 1 born in England) were brutally murdered, you’d think it was a permanent part of the floor design.

As barbaric as the butchery has been out of the Middle East in recent months between these events and the repeated beheadings ISIS/ISIL performs on Americans and British citizens there, I wonder why are the networks are giving advertising to these bastards.

If there is a better way to do this without turning CNN, MSNBC et al into a lengthy commercial for these terrorist thugs, let’s look into it, shall we? Don’t even waste time showing b-roll of these YouTube videos. Just report, and move on.

Last week, I had mentioned that one of the shows I ran the board for at Sun Radio had been unearthed: Stan Major’s debut on October 1, 1991. I had the honor of exchanging comments with Stan on that post, and I had reminded him about the show we did on Thanksgiving morning of 1991 on WWCR (World Wide Christian Radio), a shortwave station based out of Nashville.

Getting WWCR to carry the show, even for one night, was a big deal. Only two other shows from Sun had aired on WWCR: For The People with Chuck Harder (which by late 1991 was long gone), and Tom Valentine’s Radio Free America. Remember, the Internet wasn’t as easy to get for the home computer hobbyist (if you were one in the early 90’s) as it is now. These days, all you need is one station and the ability to promote your show and promote the hell out of the Tunein website or the IHeartRadio website or app. The bigger the show in those days, the more affiliates you had to have. In that particular time frame, overnight talk shows were ripe for the pickings. Larry King was in his swan song years at Mutual, plus Tom Snyder and Deborah Norville had shows that could be competed with.

I’m very proud of the work I did with Stan, especially. At Sun Radio, like Mutual or ABC at the time, his crew of the show consisted of one person: me. Larry King would have a person who ran the board, a person who screen calls, and probably a person or two who did whatever gopher work was needed. (I also didn’t have a union behind me either to insure I got paid well, working in Florida, as I would have if I were working out of NYC or DC.) That’s not me trying to brag, that’s a fact. Thank God I (or any of the other board ops) had a medical emergency (or fell asleep, as I once did for a few minutes on another show) of some kind, because whoever the host was would have been s*** out of luck had that ever happened.

My work on this particular show was not as good as I remembered it, to be honest. The last 15 minutes of Stan’s weeknight shows during this time frame where a Chinese fire drill, and I felt more like an air traffic controller than I did a board op! Not only am I answering phones (doing very light screening) and running the board, but I’m also getting the next show prepared, hosted by Max Stewart, calling him up on the Comrex. With that many balls in the air, s*** tended to happen, like leaving the outro music pot a little too hot at the end of the show.  Ouch.

At the end of the show, I get a call on the hotline we had set up for the evening from none other than Neil Rogers. This was three months before WSUN picked up Neil’s WIOD show out of Miami, so what I knew about Neil came from Stan. Neil asks me for Stan, and even a few moments after the show Stan is long gone. Neil’s in disbelief, but I’m telling him the truth. On top of this, Stan was filling in for Joel Vincent (Howard Hewes) for a 8pm-10pm shift the following night (Thanksgiving Night), on top of his normal 12am-5am shift, or 12 hours in a 29 hour stretch.

The call the farthest away that night wound up being someone in Scotland, but Stan also wound up getting calls from Canada and England as well.  Out of all the shows I did in seven years behind the scenes, it is the one that sticks out in my mind the easiest.

Again, thanks to John Baker, the Neil Rogers Archives and Stan Major for making this recording possible.

A very trippy song from the 1960’s that many from the era no doubt remember, plus Frank’s daughter and Mr. Hazelwood made a good songwriting team that had a few other hits to boot.

Have a good weekend!

The Internet must not have broken, as I’m still able to publish my blog entries. The hype meisters on the ‘Net thought the latest pic of Kim Kardashian’s shiny bare booty would bust the tubes. Then some thought Chelsea Handler’s buns would do likewise. Then Kim showed off the other side of her body minus clothing or pubic hair, and the Internet survived that too.

Like I was saying a couple of months ago, give me a woman who is confident and/or appreciates how she looks as she is as opposed to a woman who has to get plastic surgery or a lift any day of the week and twice on Sunday.

If a woman can’t appreciate who she really is, how can she appreciate you? Just a logical thought in an illogical world.

One of my friends on Facebook that I went to school with suggests that I should apply to be on the game show “Sports Jeopardy” hosted by Dan Patrick.

Respectfully: no, no, and a thousand times no. Why?

I’m grateful that people think I know a lot about sports, and I’m thankful God gave me the brain to retain the information. But I never felt the need to compete against others in doing so, even if it was for fortune and fame. Besides, being good at something like that is an objective thing, depending on the type of game played and the opposition one faces.

People who go on game shows, and reality shows for that matter, seek two things: money and personal validation. Everyone can use money, sure, but I don’t need the validation, or someone to exploit me either. I exist. I breathe. I live, and one day I will die, as we all will eventually. I’d rather put my energies into something a little more important than who won the 1961 World Series.

Yes, I know the answer to that.

Last Tuesday was election day, and as was the case with the special election back in March, the Democrats whipped up efforts to get people to vote by calling people up and cracking the whip.

I wind up getting a call from the Charlie Crist people from their headquarters in St. Petersburg. Crist was the Democratic candidate for governor here in the state of Florida, a former Republican governor who has “seen the light” and joined the so-called good guys. They asked for my vote.

“Sorry, I voted for Rick Scott. Thank you.” I then hung up, not giving the young man at the other end of the phone a shot at a rebuttal.

While I did indeed vote for Mr. Crist, I thought, why give a politician the satisfaction? They play games with the public, they think we’re stupid, so why not use that expectation of stupidity back at them?

It turns out that Crist, the slight favorite before the votes were counted, wound up losing by about 75,000 votes to the underdog Scott. True, we’ll get four more years of an unpopular governor, but Crist was no choir boy himself in his reign in Tallahassee. The state’s electorate had no other feasible option but to chose the devil they knew as opposed to a devil that was singing a new tune.